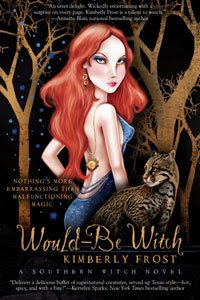 Fans of paranormal fiction greats like Mindy Klasky, Kerrelyn Sparks, and Annette Blair will simply go head over heels for newly on the scene Kimberly Frost. Her dazzling debut, Would-Be Witch, is an absolute delight that this reader found near impossible to put down.

Tammy Jo Trask is a witch. What she is not is a very good one. Having opted to travel a different path in life than the one of magic her mother and aunts chose to follow, Tammy Jo is unfamiliar with and unskilled in what it takes to make the family legacy work to her advantage. Being the inspired and artful pastry chef that she is, however, this has never been an issue- until now.

Her heirloom locket stolen at a Halloween dress up party, Tammy Jo finds her swept away in a change of events unlike any other she's ever had the pleasure, or displeasure as it may be, of following. For you see, the locket isn't just a prized family heirloom. There more to it, much more to it, than that. The locket contains the spirit of Tammy Jo's great great grandmother's dead twin sister Edie. Happy to come and go as she pleases, Edie's soul resides in the locket, as opposed to crossing over to the otherside. Mostly she chooses when and where she'll appear, but there's also one time a year that she can not stop herself from coming out. And when she does her family must be in possession of the locket or it will mean sayonara for Edie. Unfortunately for both Edie and Tammy, that day is only just around the corner.

In a small town where rumors of magic are just that- rumors, Tammy Jo must find a way to invoke her inner witch. In a race against the clock and her family's rule book, she must not only get back her locket and save dead Edie's soul but also manage to stop a town-wide crime spree that only other creatures from the paranormal realm could possibly be heading up. With no family present to help her come unto her powers, Tammy Jo finds herself with no where to turn but to her family's sworn enemy- the flirtatious and dynamic Bryn Lyons. If anyone can help her harness her power, save Edie, and get the town back to its quiet Southern disposition it'll be Lyons.

Only trouble is, the town's not big enough for two studs vying for the same girl's attention. When Tammy's ex-husband, Zach, notices the seemingly undo amount of time and attention the pair is spending on one another, he's up in arms and ready to go to the mat. Being that he is a strong unbeliever in things of an otherworldly dimension, Tammy can't just break things down for Zach. Telling him any more than he absolutely must know will only endanger him more and make herself look like an even bigger nut in his eyes. Somehow Tammy Jo must decide how to juggle the two men suddenly thrown in to her life. There's no time for the raw emotions she herself is experiencing, and she must keep her head in the game.

Chock full of witches, werewolves, zombies, and mermen Would-Be Witch proves that Frost is a force to be reckoned with. Unlike some books where you can tell the author tried too hard to include too many facets that simply don't mesh together, this book flawlessly incorporates all sorts of fun elements and crazy creatures from the paranormal realm. From the git go I was entertained and thoroughly captured by the fun world created here in the tiny Southern town of Duvall, Texas. That being said, I can hardly wait for September when the next installment of Frost's Southern Witch Series is due to hit shelves.

Would-Be Witch is quite simply a remarkably fantastic debut!