People Are Idiots and I Can Prove It! by Larry Winget

People Are Idiots and I Can Prove It! by Larry Winget
(Self-Help/Personal Development) 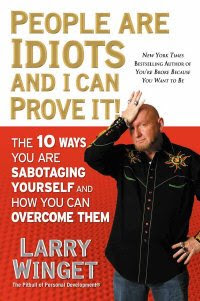 Written by proclaimed New York Times Bestselling author and Pitbull of Personal Development, Larry Winget, People Are Idiots and I Can Prove It! was more than a book with a great title. Idiots come in every size, shape, color, and walk of life. As Larry showed, most people have a little idiot living in them on a daily basis. Sound hard to accept? Bah, it is until you read you read what Larry has to say, and then it all makes sense.

The subtitle to People Are Idiots and I Can Prove It! is The 10 Ways You Are Sabotaging Yourself and How You Can Overcome Them. See what I mean? It's saying we're all idiots because we all do stupid things that unintentionally hurt us when if we'd just use a little common sense on some really common issues, we'd find ourself in a far better position in life. Take for example the health issue that Winget brings up. People everywhere say they want to be healthy, self included, but when it really comes down to it we only do so much to reach that goal. We could set a goal and then work ardently towards achieving it. Or we could do what most people do, and only partially work towards the goal. A person who eats and exercises well because he wants to be healthy, but who then turns around and smokes cigarettes on a daily basis is an idiot. He's not overcoming the stronghold that keeps him from reaching his goal. He can eat as healthy as he wants and workout til kingdom come; however, if he continues to smoke he'll never be truly healthy.This is just one example that Winget gives throughout his book.

It's so easy to imagine that you're not one of the people he's talking to, and then you start to read what he's written and you find you were wrong. We all do stupid things. I wouldn't necessarily have gone on to proclaim we were all idiots for making small mistakes, but I'm not Larry. He's brash, he's hardcore, and he's straight to the point. Nothing wrong with that. Nothing wrong with that at all. Infact, I think it's Larry's stick it to you attitude that really makes you raise the bar on your thinking. He's not pointing out anything new fangled. All he's really doing is approaching some common sense information in a new way.

I thought the book was well developed and informative. When there were sections where the author wanted you to list out certain aspects of your life, goals, etc he was certain to include space actually within the book. I personally feel incredibly naughty if I write in a book, so I still used scrap paper for those. However, I think it's great that the book is set up similar style to a workbook because I think many people would be far more likely to complete the list activities with the space provided directly to them within the pages of the book. And the book is designed to be effective in the reader's life only if he or she takes the time to do the lists. Without them it's like you're reading the info but you're not really applying to your own life.

People Are Idiots and I Can Prove It! is broken down in to three well defined sections. The first shows readers in what capacity we can all qualify as idiots. With the worksheet lists readers are given the opportunity to take a firsthand introspective look at their lives to see in what areas they might be coming up short. Once they've established what areas they are sabataging themselves in Winget moves on to the second section which sums up ways they can fix the idiot factor to move on to success. Again, the included worksheets are incredibly beneficial because readers can list out and plainly see what actions are needed to be taken if they are going to overcome the obstacles that are holding them back. Lastly the third section just pulls it all together and gets you to gather your thoughts on the book as a whole.

Moving beyond the definition of idiot to living out one's life with one's best dreams and goals at heart isn't difficult at all if you're willing to go the extra mile to figure out where you're causing yourself to go astray initially. As Winget shows, it's never too late to change, though obviously the sooner the better.