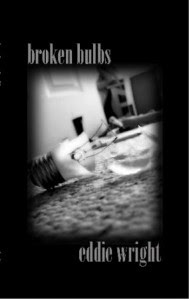 If you're ready to go on a bizarre and crazy ride, Eddie Wright's Broken Bulbs is just the book for you. As a novella, what it lacks in size, it certainly makes up in story. The thing is though, this is not a book that just anyone could pick up and appreciate. It's dark, gruesome, and offbeat. The character, Frank, is not your average, run of the mill, center stage guy. He's intensely disturbed, and getting inside his head is like, I can only imagine, taking one hell of a wacked out drug induced trip. But then, that is the point, isn't it?

Frank, like everyone else, just wants to be a part of something- something great. Tired of being a nobody, he strives for "somethingness". That's where the enigmatic Bonnie comes in. Bonnie fills a need in Frank's life that no other person can fill, and she brings with her a source of inspiration that no one else can offer. Willing and able to directly inject Frank with seeds of genius, Bonnie opens the world to him as his creative muse. Freely playing the role of puppet master and audience, Bonnie pulls the strings to make Frank come unto his own in his search for "somethingness".

In a weird and complex way this story bridged the gap for readers like myself who have been fortunate enough never to have experienced any such deeply debilitating addiction as Frank obviously suffers from. I'm actually not really sure myself, even after reading the book, how much of what took place was supposed to have been real and what, if anything, was to have been figments of Frank's own messed up and severely strung out imagination. Take for instance, Bonnie. I have no clue if this chick really exsisted in flesh and blood or if she was simply a byproduct of Frank's fracked up mind. I think I'd have to read this one through from start to finish again just to fully grasp the tale in its entirity.

Broken Bulbs was disturbing and humorous, horrific and eccentric. Not a book for all, as I said already, but a book that will doubtlessly be well received and enjoyed within the right circles. One that will leave you wondering time and time again, "Did I just read that?!" Broken Bulbs is a fine specimen of what insanely inventive gems would be overlooked were it not for the fine world of independent publishing.