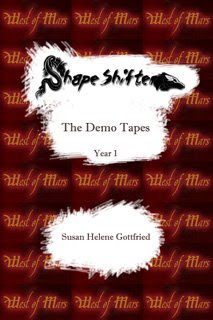 Fans who have followed Gottfried's blog posts since early 2006 will likely have already read the entries which make up Shapeshifter: The Demo Tapes, Year 1. But whether you fall in to this category or not, this book is one not to miss. Those who already read and delighted in the entries as blog posts will be thrilled to find them now in chronological order. Meanwhile, those who are new to Trevor's and Mitchell's world entirely, like myself, will enjoy finding themselves sucked in for the first time.

The thing about Shapeshifter: The Demo Tapes, Year 1 is that it doesn't really tell a story. Well, rather it tells small tidbits of story, but never anything in it's entrity. Written to be a companion piece to Gottfried's full length Shapeshifter novel, Trevor's Song, this compilation serves as an excellent introductory piece.

Readers are introduced to Trevor, Mitchell, and the band- Shapeshifter. And as we follow them from their first chance meeting, via Mitchell's sister Amy, we become drawn in and are given the chance to really get to know the characters better. For instance, you know Trevor comes from a bad place emotionally and physically. However, until several segments in to the book you don't realize from how bad a situation he came. We see that even though Amy and Mitchell drive each other crazy and thrive on making one another uncomfortable, just like any brother/sister combo does, underneath it all they both just want the best for one another and love each other fully. We watch the boys start out as young, wayward teens, and as the stories progress we see them continue to develope into strong, seasoned adults. The timeline is ragged and raw, yet that's precisely what makes you want to dive in and see what else goes on behind the scenes.

Through this preview into the crass, crazy, and often times hysterical rock and roll world of Shapeshifter we get to see what makes the cast tick, what makes their stories draw together. It's through doing so that we get that urge to satisfy the taste for more. It's true; this is like a classic case of luring and baiting- in a GOOD way! People will read Shapeshifter: The Demo Tapes, Year 1 and be left hungry for the full story that Gottfried has to tell on the pages of Trevor's Song when it releases. Unfortunately a release date is not currently available for Trevor's Song, but those who read this book and find themselves eager to see where the story goes should be sure to spread the word. The more public demand Gottfried feels for her book, the sooner- I can only assume, will we all be blessed by its release. I know she's eager, so join the Trevolution and help her out!

P.S. If you think this sounds like something you'd be interested in reading you must be sure to check back, as I'll be hosting an interview/guest blog with the author here in the very near future.
Posted by RebekahC at 11:16 AM

Wow, what a great review, Rebekah! I owe you e-mail and shall get on that shortly. I just wanted you to know you've bowled me over with this. Thanks!

Awesome review! :) I own a copy of The Demo Tapes, and I loved it as much as you did. Vive le Trevolution!

Aww, aren't you sweet! You're gonna make a girl blush. ;)