Once Bitten: A Novel of Haven by Kalayna Price

Once Bitten: A Novel of Haven by Kalayna Price
(Urban Fantasy) 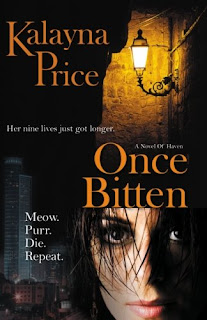 Kita is a runaway. Heir to take her father's place as clan leader, this little pussy cat just didn't feel up to the challenge. Straying to Earth from her home on Firth, Kita has managed quite well to say off the radar. Shifting from her human body in to her natural calico cat shape, Kita has been able to travel about without drawing any unnecessary attention to herself. But she is being hunted. Her clan wants her back.

Then innocent humans start turning up dead, violently tortured and torn apart. Witness reports combined with the damage left behind at each site indicates to the shifters that a rogue is responsible for the attacks. No human could be responsible for the devestation. It's with this knowledge that Kita finds herself cast in the role of prime suspect. Not by the humans, but by the hunters. The attacks began only just after her arrival to Earth which means if Kita isn't responsible first hand then she must have tagged a human thereby inadvertantly creating a rogue shifter. Once captured, Kita will be returned to her home on Firth where she'll suffer the consequences of her abandonment and Earthly disgraces. The trouble is, Kita does not want to return home. Neither does she believe she is responsible for the attacks taking place. The hunters though will stop at nothing to bring her down.

With the aid of her now spoken for shifter ex-boyfriend, Bobby; her new vampire master and sex interest, Nathaniel; and her new found magical scholar-trainee from Sabin, Gil; Kita hopes to not only prove her innocence but also bring down the responsible rogue in the process. The stakes have been risen, and it's no longer a matter of clearing her name to stay on Earth. It's now a matter of life or death, for herself and her friends. With the mage judge breathing down her neck, she has only 3 days to solve the mystery of rogue shifter. They say a cat has nine lives, but this particular endeavor is sure to burn through them all if Kita's not careful.

Once Bitten is a confident and compelling debut novel that should leave no reader disappointed. The beautifully crafted and developed characters are unique and captivating to the point where I didn't want to let them go at the end. [Side note: I'm thoroughly delighted to learn that Price has signed a five book contract, so there will, for sure, be more books coming in the Haven series. Woot! Woot!] And the story as a whole combines all the great elements necessary to make a positively remarkable fantasy come to life before the reader's eyes. There is humor, both dark and light; love; loss; gruesome and original action; and nail biting suspense. The well rounded story comes together in an exceptional way whics leaves the door open for the follow up in the series, yet the author leaves no loose ends untied. A truly magical read!