Run For Your Life by James Patterson

Run For Your Life by James Patterson
(Thriller) 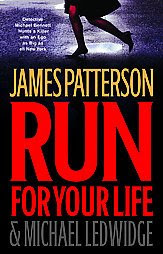 With over 160 million copies of his books sold worldwide, you know when you come to an author like James Patterson that you're not going to be disappointed. His characters are honest, realistic, and full of charm. His stories- gripping, hair raising, and full of moments that leave you hanging on to the edge of your seat in preparation for what's going to come next. To put it ever so briefly, Patterson is a master novelist with an edge for creating the utmost engaging and thoroughly addictive written word.

As has been the case with all of his previous works of fiction, the same can be said for his most recent release, co-authored by Michael Ledwidge, Run For Your Life. In this fast paced, heart thumping thriller, Detective Michael Bennett (first introduced in Step on a Crack) fights to untangle the mysterious web of deception surrounding the sudden attack on New York City's elite crowd.

When an unknown assailant, dubbed by himself as The Teacher, goes on a murderous killing spree "educating" the self righteous of Manhattan, Detective Bennett finds himself hand picked by the city Commissioner to flush the guy out and bring an end to the sudden and terrifying attacks. Because of his previous experience with the Catastrophic Response Unit, Bennett is a strong candidate, if ever there was one, to locate and intercept the brutal monster determined to "teach" New York about manners. But to do so, Bennett must not only try to figure out the true identity behind The Teacher's facade, he must also determine what links his crimes to his passion and whether or not there's any rhyme or reason to his madness.

As a single father, since his wife's untimely death just over a year before, Mike struggles to hold his family together with as little drama as possible. Yet when all ten of his kids come down with the flu at the same time as The Teacher decides to start giving lessons around town, Mike decides it truly couldn't be any worse. He's a good cop and marvelous dad, but a man needs a chance to breathe, if only for a second, if he's expected to think. And thinking clearly is exactly what he needs to be able to do if he's going to understand the juxtaposition of the random and gruesome attacks taking place across the city. Surely they're all being carried out by the same man, the one and only Teacher. It's just a matter of getting the pieces of the puzzle to come together to form the big picture that will then clue them, the authorities, in to what his ultimate plan could possibly be.

Big breaks come few and far between, and unfortunately for Bennett each one comes with only more unanswered questions. But when he finally stumbles on to something that could actually put a kink in The Teacher's deranged and twisted plan, Bennett discovers just how far The Teacher is willing to go to impart his final lesson.

With a suspenseful plot that keeps you guessing til the very end, Run For Your Life is an action packed, compulsive read that nags you never to put it down until you've read the last word on the very last page.

If Alex Cross and the ladies from The Women's Murder Club were real, they'd all be highly pleased to welcome in to their circle Patterson's most recent straight shooting hero, Detective Mike Bennett. Worthy of great praise. Patterson, has once again done a fabulous job creating a leading character who readers will want to come back for time and time again.