Bad to the Bone by Jeri Smith-Ready

Bad to the Bone by Jeri Smith-Ready
(Urban Fantasy) 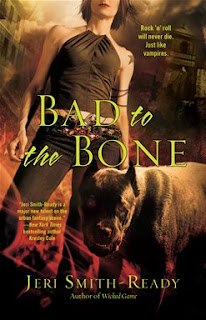 Ciara Griffin is back with her vamp friends from WVMP, and this time around the plot really thickens. Readers who are new to Smith-Ready and her incredibly original cast of characters should not be frightened to settle in with this wonderful read, but I would highly recommend first picking up a copy of the series debut, Wicked Game. For while this book could read as a stand alone, there's an awful lot of background story that new readers will miss out on if they skip straight to the second book.

When the station's signal starts being jammed and an anti-vampire, wack job religious group misappropriates their air waves Ciara and the undead crew of WVMP decide there will be Hell to pay. Not necessarily the Hell the the extremist nut job's are blathering on about either. The Hell Shane McAllister and his blood thirsty friends have in mind is something a lot more immediate and physical, though equally nasty and painful. For the vamps of WVMP, "The Lifebloof of Rock 'n' Roll" have a sweet gig going. They live in the station's furnished basement, play the music of their "life times", drink from willing donors, and all the while do so under the noses of the entire general public. Ciara's earlier marketing campaign to save the station took off so well that now the listeners believe the DJs are humans pretending, for ratings, to be vampires. The irony and reality of the matter is, however, that they truly are vampires, and as such they are pretending to be humans pretending to be vampires. Pretty trippy, eh?

If someone wants to take away the station or, worse yet, the lives of her friends, Ciara will do whatever she can to protect the DJs and help them take back control. Even going undercover and infiltrating a vampire victim support group, which later leads to her being kidnapped by the very people she hopes to stop, does not stay Ciara from caring about her vampire friends or her new rescued pet, her vampire dog Dexter. More specifically it doesn't hinder the feelings she has for Shane, her sexy and passionate, albeit reanimated, boyfriend. Nor does it

Bad to the Bone, the second installment in Smith-Ready's unprecedented urban fantasy series, will stir readers to delight with the action, passion, and edge of your seat excitement. In this wonderfully new take on the world of vampires, readers will again, find themselves falling head over heels for these mysterious creatures of the night. Lending not one ounce of heart to doubt, readers will be swept away by the concise and masterful way Jeri Smith-Ready weaves her story together. Each intricate part (ie Ciara's family history, Shane's family history, David's story, etc) blossoms forth into it's own unique tale which when fitted together with the rest adds to the alluring quality of the story as a whole which therein entrances the reader and inspires, if only for a moment, fanciful thoughts such as "What if there really were 'good' vampires?"

A page turner that is eerily mesmerizing and enchanting. This book does not fall short on any level, but instead picks up beautifully after the first book left off and leaves ample opportunity for the author to work her magic, yet again, with books three and four which are due out starting next year [2010].

P.S. For an added bonus, how about listening to each song mentioned on the "playlist" at the beginning of the book?

Then if you have time, be sure to check out each song that inspires the chapter titles. (You can find the playlist HERE on Jeri's site. For some reason I can't get this second one's code to paste properly.)

Not only is this a fun way to be introduced to some great tunes you might not have heard before, it's also a really cool way to connect, in a sense, to your favorite characters/WVMP DJs.
Posted by RebekahC at 9:19 AM

This sounds like a fabulous book! Thanks for the great review! By the way, I enjoyed listening to the playlist!

Have a great weekend!