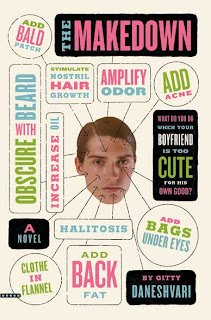 I must admit I'm a sucker for a good chick-lit read. As a busy mom I enjoy being able to occassionally relax with a book that requires no thought, yet totally keeps me entertained. That, to me, is an area that chick-lit, as a genre, excells in. I'm also a huge fan of fairy tales. Therefore, Gitty Daneshvari's The Makedown greatly appealed to me because it's not only chick-lit but a fractured fairy tale of sorts.

When we meet Anna she is overweight, has horrible skin, and suffers from major self esteem issues. Anything but the princess deserving of a prince, in appearance that is, Anna finds herself struggling to survive the day to day trials her weight brings her. She is not comfortable in her skin, but she feels helpless to do anything about it. Lacking the motivation she needs to fully achieve the body and life she secretly desires, Anna continues to live her day to day existance in a perpetual downward spiral.

After Anna's parents drop the bombshell that her father is leaving her mother, Anna decides she has to get away. Staying at home is no longer an option if she's going to stay sane. Who knows what New York will have to hold, but that's where Anna finds herself drawn. Every girl deserves to have a Fairy Godmother, or FG as Anna calls her. Maybe if she looks hard enough she'll find her in New York.

Once in New York, however, Anna finds out that her weight is an even bigger issue than she'd once thought. Everyone is stunning and skinny. She'd thought fitting in at home was hard, but compared to big city it was paradise. With no job and nothing on the horizon but take out egg rolls and pizza by the slice, Anna determines she must find her silver lining. Nothing could be worse than having to turn around, tail between her legs, and head for home.

That why when a low rent, bottom dollar job opportunity comes around Anna opts to give it a chance. It's not every day a girl with a molecular biology degree decides to become a caterer's assistant for bare minimum wage, but a job's a job. Anna doesn't intend for things to become permanent, but rather gauges she'll give the job a couple of weeks go and see where it leads.

Where it ends up leading is farther than even Anna's wildest dreams could have predicted. Befriended by her boss Janice, a former fatty, Anna is ripped from the world of fast food and empty calories to a world of healthful eating and exercise. Her figure and appearance no longer an issue, Anna suddenly finds herself on the radar of the one man her own senses have honed in on.

Ben is a well to do lawyer, suave and sophisticated. Gorgeous and outwardly everything a girl could want, Ben is lightyears outside of Anna's league. Even with the drastic makeover, Anna admits there is no logical reason why Ben should pay her even the time of day. Ben, on the other hand, determines to step outside his normal comfort zone and go for something- rather someone- a little more comfortable.

From the beginning Anna and Ben's relationship is very "prince and the pauper" like. Ben coming from a very high class way of life; Anna coming from a very middle class way of life. Both are polar opposites in the grand scheme of things, and still they're drawn to one another like magnets. Having this handsome stud on her arm isn't enough, however, to calm the storm that brews within Anna. Always last one picked and never the belle of the ball, the one thing that keeps Anna from living in harmonial bliss with her handsome catch is the fact that he is so handsome. Born and bred from strong stock, Ben is used to living a life where he receives lots of attention. It's not that he's pig headed, though in a sense he is, it's that he thrives on the positive attention vibes he receives from others. The fact that he's openly flirtatious as well does nothing to sooth Anna's inner insecurities.

Ben is unaware of Anna's past and the hurdles she's had to cross. To him his behavior is normal and friendly, but to Anna it's just too much. She's come so far, but Anna will never be one of the beautiful people. Socially and physically out classed by Ben, Anna's fear of losing him turns into the catalyst which sets her on the road to complete and utter failure. If she can never climb the ladder to reach the heights where Ben resides, perhaps she can bring him down a few pegs to rest on her very own level.

In a "makedown" of epic proportions Anna gets in deeper than she initially intends. Her fairly harmless game plan to make Ben slightly less appealing, to the masses of flirtatious bimbos on the street, backfires. It's no longer an innocent plan in action to shift Ben from his prior elegant status to that of a lowly middle class joe schmoe. Her actions have cut far deeper than that, and now she's left wondering can their relationship survive? Moreover, will she ever be able to accept herself and truly be happy with who she is as a person both inside and out?

Laugh out loud funny, The Makedown was a book I could not get enough of. From the hilarious cover to the incredible storyline, this was a book that made me laugh but also made me feel. Daneshvari's writing is fluid and witty. And I throughly loved her clever plays on words. One example would be from pg 7 when she talks about Anna's brother Barney masturbating. Not, in general, a funny subject per se, but how could one not find humor in it with puns such as "trips to the bathroom with the yearbook petered off" and "Mother... cocked her ear against the hollow wood [door]."? Do you see what I mean? It was this jocular tone and technique that made it impossible not to anxiously await each up coming page.

This story was fresh and fun. The fact that the characters were well developed and genuninely believable only made it that much more enjoyable to read. Even the slightly psychotic side of Anna was believable because despite how crazy and outlandish some of her behaviors were I felt they were honestly [and sadly] ways that someone [most certainly not everyone by any means] with such a sorry impression of themself and with such emotional insecurities could act. I'd hate to be that person or the person she/he was involved with, but I don't think Daneshvari could have done a better job writing the role of this conflicted character. As far as the story as a whole goes, I was a bit disappointed with the direction the ending went. I, however, can certainly respect and appreciate why the author chose this particular route. Not only does it definitely work; it provides an interesting sort of closure.

I got strange stares and questions about what I was reading everytime I went out in public with this book. The cover itself is a conversation starter, but I also couldn't help but laugh audibley with the off the wall and sometimes over the top humor contained on the pages. Lest I go on further and give too much away, let me just say that I believe Daneshvari has a real winner here!