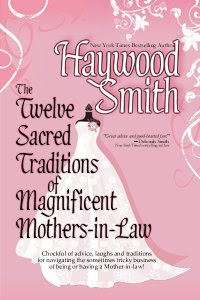 If you are like me and have been blessed with a great mother-in-law then you probably don't even need to consider this book. However, if you are getting ready to get married or know of someone who is, or better yet- know of someone who is currently engaging in a rocky dynamic with their mother-in-law, then this little gem by Haywood Smith may be just the gift to get.

With her previous books being set in a fictional realm you might expect for The Twelve Sacred Traditions of Magnificent Mothers-in-Law to also be fictional. You'd be wrong. In this light hearted handbook Smith outlines twelve etiquette guidelines that, if followed, will help ensure your realtionship with the in-laws to be far less chaotic and stressful than that which we've all become familiar with by watching even just one episode of television's "Everybody Loves Raymond". Here we have a show that was hilarious to watch, but if the show stared ourselves instead of the Barone family we'd probably find the humor somewhat lacking.

Moms are great, but many have a very hard time letting go of the reins on their grown child's life. It's okay to want the best for your child and to want to help make sure they are well taken care of, but it's not okay to continue to try to parent your child and direct his/her life when he or she has long since left the nest. A mother-in-law can be both a blessing and a curse, and for the sake of everyone's well being and sanity I think it's very important that certain unspoken rules need to be in place and adhered to.

Mother-in-Laws don't have to be hated. Infact, they shouldn't be. But despite their best intentions often times what they mean as helpful and constructive advice or offers comes across as criticism and interference. If you are old enough to have a MIL then you are old enough to take responsibility for your own life and actions. And while it's great to have someone available to help you make it through the learning curve that marriage brings, that's what the spouse is there for. There should always be an open dialog between parents and their grown children so as to avoid hurt feelings, but the parents (MILs specifically) must be content with allowing their child to live his/her own life. It's unfair to press your own thoughts, opinions, way of doing things on your married child and their spouse. You had your chance to parent when your child was young, undoubtedly at the time you had to deal with your own MIL issues. Use this time to reflect on that, and make ammends with the fact that you now are the MIL and not the hand's on controller of the relationship. You were allowed to make your own decisions and mistakes as you settled into adulthood via marriage and parenting. Now is the time to relenquish control of your child's life and give him/her that same opportunity.

In The Twelve Sacred Traditions of Magnificent Mothers-in-Law Smith does a first-rate job of gathering together what are probably the twelve most crucial rules for families to abide by if they are going to go about their business with as little conflict as possible. I won't list what the rules are here because I think that's half the fun of this book- waiting to see what the guidelines are and how they rank alongside each other. Let's just say that they are all very simple, and if MILs, DILs, and SILs would take the time to review them I think there would be far less agitation in the world of in-laws.

Written in a witty prose with humorous illustrations scattered throughout, this is a book that packs a punch full of wisdom and advice but does so in a way which makes it fun and diverting. A definite must read if the MIL topic applies in any fashion to you!