Secrets to Happiness by Sarah Dunn 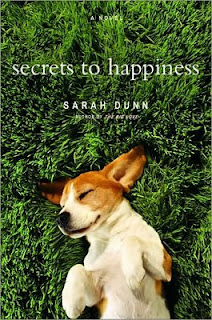 The image and layout of cover for Secrets to Happiness by Sarah Dunn gives off a calming and happy feel. What's not to love about a cute puppy basking in the Summer sun on a thick green bed of grass? It's almost as if the cover is to say, "Once you find happiness all your worries will be gone and you can sit back and just soak it up." Not an entirely true statement by any means, but it does sound good.

What readers will find when they tear in to Dunn's new novel, Secrets to Happiness, is that true happiness can be quite ellusive. No matter how confident you are in yourself or your surroundings, all it takes is one small misstep to send your world tumbling down around you. Such is the case for Holly Frick.

Holly started out with big dreams- be a wife, be a writer, be a mom, be successful. But as she becomes more hopeful that each will take off, the opposite happens and they crash miserably. Her marriage falls apart, and her husband leaves. Trouble is, she's still in love with him. Her career takes a nose dive when she gets moved to writing for a low rate tween's tv show, and her novel doesn't generate the heat she'd hoped. It seems to Holly that she's constantly fighting an up hill battle where she can never gain any ground.

Wondering if she's doomed for a life of failure and angst, Holly settles in to the routine of just getting by. Soon just getting by seems to be what she sees taking place all around her. Intimate relationships are in the toilet. She's taken to sleeping with a friend's younger- legal, but way younger- brother, behind the friend's back. And even her best friend [Amanda], who she thought had a rock solid marriage, secretly announces that she's having an affair.

Holly, always the moral compass- even though in most ways she's more likely to dole out the advice than to follow it, tries to convince Amanda to back off the affair. She's got too good a thing going with her husband Mark, and she doesn't need to screw that up for a fanciful fling. It gets worse when Holly, who actually starts out thoroughly despising Amanda's lover, decides she herself is quite taken by him.

Adding to the list of craziness that is Holly's life she chooses to adopt a dog. She hopes that perhaps a canine friend will bring her some much needed comfort from the strained and lonely existance she's come to know, and an animal can't betray her trust like a human. Can he? What Holly doesn't know when her heart settles on her new found friend is that he is dying. The cancer should be treatable, but only time will truly tell.

Secrets to Happiness, is not a book that reflects positively on marriage, but rather portrays the many characters (whose stories are all so intricately interwoven) living a very capricious existance. It doesn't matter what tomorrow may bring or what the consequences are of their actions; they all just do as they please- when they please. What's sad about it is that as unfortunate as it is I believe Dunn has probably written herself a very realistic story. Despite how much I'd love to see the sanctity of marriage really built up in a book and in today's society as a whole, I think the lamentable truth of the matter is that today marriage is not considered worth fighting for. I believe that most people are out to find the quickest high, no matter the long term cost to their own existance. The fact that people seem to feel genuine happiness is always on the other side of the fence just goes to show what a superficial and shallow culture we've become. If we can't see the beautious world around us we'll never be sincerely happy.

Keeping this assessment in mind, I still quite enjoyed Dunn's book. Much as I was disappointed with many of the character's decisions, I felt Dunn stayed true to her concept of showing how far people, from all walks of life, will go to find what they consider to be true happiness and contentment. Secrets to Happiness never felt overworked or too heavy, despite the bittersweet storyline or many thought provoking topics-controversial as many were- that she interjected. Instead, the author did a fine job of keeping even the most deep or depressing of aspects rather upbeat with her continuous witticisms.

Dunn also showcased her ability to draw in the casual reader through her very real, every day, commonplace remarks. Some examples would be her reference to MOPS (Moms of Preschoolers), Highlights Magazine, and Crisscross Applesauce. I am a leader for my local MOPS group, used to read Highlights in the doctor's office (just like Holly remembers doing), and my daughter learned Crisscross Applesauce at school. These may seem like insignificant portions of the book to latch on to, but something about them is very familiar which allowed the story to draw me in deeper. As a whole, despite the many characters and story facets, Secrets to Happiness had a seemless flow and kept a great pace through to very the last page.

**Thanks to Miriam @ Hatchette Book Group for sending along this review copy!**
Posted by RebekahC at 10:46 AM

Love that cover. Sucks you right in, doesn't it?

Agreed. I still feel like buying the book just for the cover. Jos. from troybear.blogspot.com .