The Winter Rose by Jennifer Donnelly 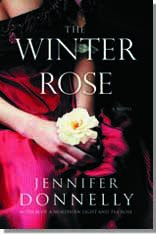 Initially, when the opportunity came up for me to read and review this book I felt like the book was calling to me, choosing me. It was anything but my normal kind of read. But I'd heard many great things about Jennifer Donnelly's previous works, so I figured "what the heck". I chose the book. Then it arrived and I saw how enormous it was (707 pages, to be exact), and I started second guessing myself. What if the book was so out of my comfort zone that I couldn't get in to it no matter how hard I tried? What if I'd made a mistake in asking for it? Had the book really chosen me after all, instead of the other way around? I decided to put it off for a couple of days while I mulled it over in my head and worked on gaining the courage to tackle it. There it sat on my desk like a huge white elephant in the room, screaming at me until I could ignore it no longer. I finally picked it up- I chose it, and that's when the magic began.

The Winter Rose gripped me in such an explosive way. There were times I laughed, times I was literally shouting at the book and shaking my fists at the characters' stupidity, while at other times I could almost feel my heart breaking for them. They were so real- the characters, the setting, the story. I loved the way there were several different stories all going on parallel to one another, but how they only intersected when the time was just right. There was such a smooth and consistent flow from one scene and storyline to the next, that I never found it hard to keep track of who was who or what was what. And Donnelly's descriptions were so incredibly poignant that I couldn't help but feel transported in to another era and place. I'll be the first person to admit that history was never my strong suit in school. Yet when I was reading this, it felt like the historical background was secure. It felt like the author had thoroughly researched her history to hit the details surrounding this time period spot on. Granted any good author would, but just the attention to detail and how she left no little thing untouched upon was amazing. I actually feel like I know more about the early 1900's after reading this book than I did before I started.

In the end, if I was to have any complaints at all about this book I would only be able to come up with one. That is, I think that after spending several hundred pages building the story up, perhaps the author might have rushed the last part just a teeny tiny bit. It wasn't a bad ending by any means; however, it seemed like so much time was spent on Parts One and Two that by the time Part Three rolled around things just happened a little faster than I would have expected. Still a great story and ending though.

Additionally, I have to say that this is a book I would just love to see adapted in to a screenplay. Lately there seem to have been quite a few period pieces come to the big screen, and I can totally see The Winter Rose showing there along side them. What a wonderful movie that would be.

So, I started out not knowing if I chose the book or the book chose me, but then it dawned on me. In the end it really doesn't matter who chose who. What matters is whether you liked each other. And in this case, we most certainly did.

Hey Rebekah, just found your blog today. I read a ton so I will be following your book reviews. But I LOVED, LOVED this book. I just finished it yesterday. Hopefully you read the first book called Tea Rose. It was super good. A 3rd book to finish the trilogy is on it's way but I don't know when it will be out.

Also, I noticed you read paranormal stuff . . . I'm sure you have already . . . but if you haven't, you MUST read The Sookie Stackhouse Southern Vampire Mystery books. They're an addiction and freaking hilarious.