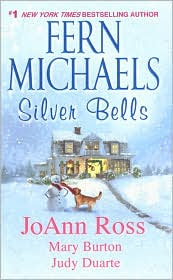 Silver Bells, while based on a common Christmas theme, is an inspirational anthology that I would say makes a great read no matter the time of year. Each individual story does happen to be centered around the Christmas holiday, but in each this is a secondary aspect when compared to the main storyline. I, a person who will generally avoid holiday related reads unless it's the holiday season, was uncertain how much I'd enjoy this particular book since I was getting to it after the holidays. As it turns out, my doubt couldn't have been any more misplaced. This was an incredible, make your heart go all warm and fuzzy, compilation.


Silver Bells by Fern Michaels
In the first story, Fern Michaels' Silver Bells (which does happen to be the title for the entire book too), we meet actress Amy Lee. Unsatisfied with her life as a big screen goddess, Amy returns to Apple Valley the place of her early childhood home. Hoping to relax and reconnect with her past, Amy isn't expecting how quickly it will all come rushing back at her.

Being the mother of two young twins and the wife a deployed military man, Alice Andrews wasn't holding together by more than a frazzled thread. At the sight of her brother-in-law, Hank, showing up to spend the holidays, Alice does what every mother, at least at one point in her life wants to do, she runs away. Leaving Hank with the twins and a laundry list of things to do, Alice throws caution and reasoning to the wind, then she's gone.

Hank who just happens to be Amy's childhood love interest, has no idea that Amy is in town for the holidays. After her parent's tragic death all the many years before, Amy had been rushed away from Apple Valley to California by her well meaning aunt. And that was the last Hank had ever heard or seen of her. So, when the pair discovers that they are suddenly and once again holiday neighbors, it becomes a chance to make up for years lost.

If it all happened seemlessly though there'd be no chance for the story to really build, especially in one as short as 82 pages. Let me tell you though, it is a great story with plenty of ups and downs, and an ending you're sure not to be disappointed in.

Dear Santa by JoAnn Ross
Holly Berry is not one for Christmas. So much in fact that even with the holiday upcoming, she sets out on a trip to research, of all things, a murder that she's thinking of using as a base for her upcoming book. But due to bad weather, a reindeer, and a wrecked car Holly finds herself stranded in, of all places, the little mountain town of Santa's Village. Yes, a town so caught up in the spirit of Christmas that they live and breathe it 24/7, 365 days a year.

Surely this can't be happening to Holly. There's got to be a way to get out. She's got a book to plan, and she can't be wasting her time away in a town that so obviously goes against everything she belives in. And what's with the attraction building between her and her rescuer, Gabe? Could it just be a case of temporary hero worship? Whatever the case may be, Holly senses the attraction is going both ways, and she's not sure how to deal with it. Add to that the fact that she's overcome by the holiday spirit surrounding her every which way she turns. It's enough to drive a person crazy, yet slowly but surely she's finding her heart warming to the idea.

Will Holly give herself over to attraction and the simple joys of Christmas?

Christmas Past by Mary Burton
Of all the stories in this compilation, I'd have to say that this was the most unChristmasy of the bunch. It was kind of strange how the story fit in as it definitely had a grittier feel to it. But fit it did.

Nicole is a single mother who, since having escaped an uneasy and tormented past, is simply trying to make a fresh go of things in her life. She may not have much, but she and her daughter, Beth, are safe. What's more, they have friends and a place in life free of fear.

Nevertheless, everything changes the day she puts in an unmarked video tape found forgotten but addressed to her. And who or what of all things should appear on the tape but her dead ex-husband. The person solely responsible for causing so much pain and fear in her life.

Bound and determined to shake the shackles of her past, Nicole sets out, as instructed by her ex on the video, on an endeavor to discover the truth about a friend's death. It's the least she can do for her friend's family this holiday season. Having suffered more than her fair share of abuse and pain at the hand of her contemptuous ex-husband, Nicole's best friend encourages her not to set out on her own. What she'll find is uncertain, and it's all together likely it won't be as cut and dried as the video implied.

Trying to do the smart thing, Nicole goes to Sgt David Anders, the man most recently known for trying to steal her heart away. It's not an ideal situation because Nicole hasn't actually seen Anders since she told him they were moving too fast and called things off between them. Add to that the fact that they're now getting in to uncharted territory wherein her sketchy past with her ex is concerned. This isn't the way she'd envisioned getting back together with Anders, if at all. Still when push comes to shove, Nicole would rather have someone by her side that she can trust than go it alone on this unpredictable adventure. If something romantic should crop up between them during the iterim, they'll just have to cross that bridge when they come to it.

With action, intrigue, and romance you can't go wrong here.

A Mulberry Park Christmas by Judy Duarte
In A Mulberry Park Christmas there's more than a neighborhood feud brewing on Sugar Park Lane. Mac and Jillian haven't seen each other since they were teenagers- since the day Jillian obeyed her cancer afflicted father's wishes and broke things off with Mac. What Jillian never knew was how deep her act had cut Mac. Full of pride, he'd brushed off her dismissal as if it meant nothing to him. On the contrary though, it broke his heart.

Now years later, Jillian finds herself returning to her father's old home on Sugar Plum Lane. Her husband has left her and their kids for another woman, and Jillian just needs to get away from everything that had once been a part of her married life. The trouble is as soon as she and the kids set foot on Sugar Plum Lane, Jillian's son becomes an unwilling participant in feud with their old crotchety neighbor, Charlie.

Mac hasn't lived in these parts in years himself, though a dear friend's death has recently brought him back. He has no intentions of staying or involving himself with the neighbors; he's only in town long enough to ready his friend's house for sale. Then it'll be back to his loft apt, and the life he's come to know.

When Charlie comes to him and asks for his assistance in dealing with the young ruffian next door, Mac's initial instinct is to remain a bystander. Howbeit, as a detective, Mac has an ingrained sense of wanting to catch the bad guy and keep the peace. Figuring that Charlie is blowing the entire situation way out of proportion, Mac decides to step in momentarily to ease the agitation and hopefully settle things once and for all. Mac figures he can show up at the kid's house, have a quick chat with the mother, and be on his way. But when the woman who answers the door is Jillian, Mac's world is suddenly turned upside down.

Only time will tell if the starcrossed pair can break free of their illfated past to turn over a new leaf that will leave them both sharing the best Christmas of all.


Again, this was a really great book. I have never been a fan of anthologies for the pure and simple fact that I don't usually enjoy how the authors must cram so much in to so little space. To me it seems you generally don't get to really connect with the characters or everything is so rushed it becomes unbelievable. Somehow though each of the authors presented here has managed to not only develope and write an entertaining and sweet story, but they've each done so compactly and without leaving any holes in the construction. Each story was passionate and sweet, yet had a great plot, well developed characters, and enough detail to thoroughly draw me in. I found myself sad when each came to end, yet I didn't feel like I was left grasping for anything to pull it all together. Even the romance was balanced in such a way that made it believable for the characters in play to develope and act on their common feelings towards one another.

Of all the authors featured in this book, Duarte was the only one I'd previously had the pleasure of reading. That being said, I can't believe I've gone this long without ever being introduced firsthand to the works of Michaels, Ross, and Burton. That'll all change from here on out. Each has gone on my list of authors to read again. Seriously, they all contributed such fabulous shorts for this book.

Thank you to Joan S for this review opportunity.
Posted by RebekahC at 9:31 PM