The Secret Lives of Men by Christopher Blazina, Ph.D.

The Secret Lives of Men: What Men Want You To Know About Love, Sex, and Relationships by Christopher Blazina, Ph.D.
(Self-Help) 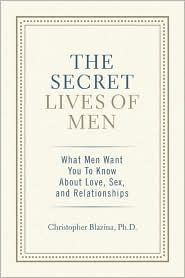 It seems I've been on a non-fiction kick lately which is really unusual for me. I do enjoy reading non-fiction, but generally speaking I tend to lean more towards the fiction side of things. When I received an invite, however, to review The Secret Lives of Men the title sparked my curiosity. Naturally that meant I had to accept.

To be brutally honest, I'm not sure this book was really my cup of tea. I believe the author is likely a skilled researcher and physchologist, but the information just didn't excite me. I found I was forcing myself to drudge through it just so I could write the review. I definitely found portions of the book to be interesting or informative (More specifically Parts I and IV.), but over all I found it be to be a bit tedious. Maybe if my dad had been emotionally stoic, or perhaps if I was married to a man as such I'd have found better use for the book. Maybe even if I had a background in psychology, more than the one semester I took in college, I'd have benefitted from it more. As it was though, I really didn't get a lot out of this book.

I understand and agree that over time men seem to have been given the short end of the stick when it comes to what is socially acceptable and what is not when considering the emotional, er more feminine side, of existance. I also think that men tend to have high pressure on them when it comes to the three P's (as Blazina puts it) of Manhood- progenitor, provider, and protector. These three things can be emotional hot items for a man, and emotions are something many men in today's society tend to label as too feminine. Unless they're hard core and not touchy feely, most emotions are barred from the average man's public image (meaning from immediate friends and family too).

But I do think that sometimes there can be just way too many excuses. I don't doubt the validity of the excuses, or rather reasons behind, the inept emotional behaviors that Blazina discusses, I just don't think they really apply as much as the author might have you believe. I tend to follow the mind set of men and women being equal. We both have our own emotional, physicial, and spiritual struggles. We all can be made to feel like parts of ourselves are bad or shouldn't be shown to the outside world. I really don't think that applies solely to men.

Part I (The Secret, Inner World of Me) of The Secret Lives of Men goes in to what the author describes as "The Ten Commandments of Growing Up Male". As we've all likely seen, if not in real life, on tv or in books, there do seem to be a select set of fundamental rules for boys, as well as for girls, when growing up. Boys are the dirty ones, the strong ones, the ones who like to fight, and who hide all emotions that tend to be too touchy feely. I wasn't aware that there was ever a specific list of commandments, so to speak, but many make sense when you consider them. And that does shed an interesting light on the subject at hand.

The author then moves on to the three parts I found most interesting within the entire book. These were the sections where Blazina discussed libido, sex, and aggression.

I had no idea that libido isn't specifically related to sexual urges. I always was under the impression that libido was another term for sexual desire. And while it is in many instances, it does not soley relate to the sexual side of things. On the contrary, I learned that libido is technically an energy put forth towards the development of oneself or a relationship with another. Libido actually has to do with work and feelings involved in any human connection where there are "tender feelings".

As for the sex, I found this segment quite interesting because the author breaks sex down in to several different types, and what each kind generally implies the man is feeling. I've heard of the majority of the types labeled here, but there were also a couple I hadn't heard defined quite so before.

The author also breaks down aggression in to several types. And again he defines what each implies the man is feeling at the time of experiencing the said aggression. Like I said earlier in regards to general emotions and struggles, I think these could easily apply to men or women. The point though was that I found the breakdowns and discussions intriguing.

Parts II (The Growing-Up Years) and III (Making Peace with the Past) were the hardest ones for me to get through. My husband had anything but a great childhood, yet I don't really see him being flawed or damaged goods because of it. He is a wonderful person both because of and in spite of his past. To me I just didn't see a lot that would currently be applicable to my own life (ie husband's life) in this section.

Lastly, Part IV (What Every Man Needs from a Woman, but Is Afraid to Ask) was about summing up the man and making your relationship together be the best it can be, all the while giving him room to be his true self. I found the section on how to give feedback somewhat insightful, and I also appreciated the the Relationship Red Zones, Toolbox Tips, and Wakeup Calls that were scattered throughout each chapter in the entire book.

All in all I'd probably give this one a 3 out of 5 rating. It wasn't a great read for me personally, but I can see why it has it's merits.

I have to say I agree with you on most aspects.
I was very eager and excited to read this book, but then I felt I was left with a lot of information that was not news to me. I also often thought that what was presented as specifically male, really could count for male and female behavior or patterns equally.
All in all, I lost interest half way though the book, but finished. I think I came away with some useful information, but this book is not what I would call full of wisdom.
This is my first blog posting ever. So I guess the book influenced me more then what it intended.