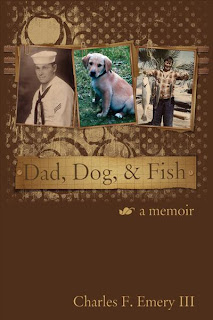 Charles F. Emery III loved his father like no other. Together they became adventurers, making and experiencing many tales worth telling. Now finally having taken pen to paper, Emery has compiled those stories so that others too can know the man he grew up loving.

What you'll find between the pages of Dad, Dog, & Fish are Emery's most notable and entertaining life moments. As he recounts, through each chapter, his life experiences with his father, he not only is able to feel closer to him, but he allows the world to see just how special a man his dad was. Their connection, like most boy's with their father's is not hard to recognize. And the way in which Charles relays his childhood memories, and those from young adulthood, give just a glimpse at what growing up in the Emery house must have been like.

It's always been said that man has no greater friend than his dog. So, it only seems fitting that Emery would choose to dedicate a substantial part of his book to talking about his trusted canine, Bunkie. The yellow Labrador Retriever entered Emery's life during the time he was serving in the US Navy. His adoption was not one that set well with the Missus, but Emery was a sucker for the cuddly little fuzzball. Cuteness aside, it didn't take long to learn that Bunkie's initial calm and adorable demeanor was all a ruse. Yet, despite his many puppy downfalls, and there were plenty, he immediately became Emery's closest friend and companion. A relationship that lasted 14 ½ years.
It wasn't the most finished or polished book, the flow was often choppy, and sometimes the point was lost. And yet, Dad, Dog, & Fish was really a pretty good read. Emery's fine sense of storytelling interfaced with his gift of humor to present an overall smart and charming memoir full of several great lessons and insightful reminders.
My thanks goes to the author, Charles F. Emery III for allowing me this review opportunity.
~Bookish Mom, aka RebekahC
Posted by RebekahC at 7:29 AM

I stopped by from J. Kaye's blog as you were mentioned just to say 'hi'

Hope to see more of you!
Mel