Conan Doyle's Wallet: The Secrets Within by Patrick McNamara 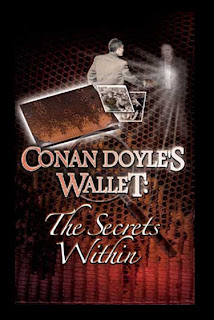 Sir Arthur Conan Doyle, author and creator of the world famous Sherlock Holmes books, wasn't always a believer in the unknown. Born a skeptic and having renounced formal religion, it was many years in to Doyle's life that he began to find an interest in spiritualism. Once he began to take an interest in things of a spiritual nature, he fell hard, and soon became a self proclaimed spiritualist.

As McNamara presents through his book, Conan Doyle's Wallet: The Secrets Within, once Doyle died in the physical sense, his spirit continued to live on on the other side. A psychic-medium, McNamara claims to have been visited many times throughout his lifetime by the spirit of Doyle, and claims to have been given the greatly enlightening opportunity to communicate with him on a regular basis after coming to win his wallet through a Christie's Auction House auction. Doyle supposedly used the wallet not only as a way to open up the lines of communication with McNamara but to also therein open them up to the rest of the world. Using McNamara as his go between, Doyle allegedly came to reveal many great things about his own life and the afterlife through the items still contained in his wallet at the time of the auction sale.

Some might condemn me for I did not go in to this book with an open mind, but I did go in to it with an innocent curiosity. As a Christian I knew I would not agree with most of what McNamara would present to the reader as truth regarding the afterlife. I don't doubt that McNamara is a pyschic-medium, as he claims, but I do doubt that he really intereacts with the spirits he believes he deals with. For you see, I do believe there is a Heaven and a Hell, a God and a Satan, angels and demons. I believe there are evil spirits that will do everything in their power to manipulate you so that they can steal, kill, and destroy. I believe that in order to convince humans to shun God's existance and principles and to inundate us with doubt and fear, that Satan sends his messengers and demons to try to convince us of something that is not true. In other words, I do not, as the author would have you believe, accept that when spirits come through with a message that it is from a loved one as we're often lead to believe. Likewise, I do not believe that we are all going to move on to different spiritual planes, based on our own mental and spiritual creating, once our time on earth comes to the end. And I don't believe that all we have to do is think positive thoughts and be a good person to move on to a good place from here. I do believe that we should all strive to be good people with positive outlooks on life, but I believe in the Bible and the principles therein.

But my personal religious views aside... back to the book. I found it interesting to read about Doyle's history. I had no idea he was so heavy in to spiritualism, nor did I know that he and Houdini had a past. I also happened to be one of those people mislead by popular fokelore, and actually learned from reading this book that Houdini did not die during his water chamber trick on stage like I'd come to believe. Apparently, that was a falsity propagated via an old movie about Houdini.

I thought that up until the the last 1/2 to 1/4 of the book, Conan Doyle's Wallet: The Secrets Within, whether read as fact or fiction, was intriguing. Then the appeal was gone as soon as McNamara's story about Doyle came to an end. It seemed like rather than call the book quits once he'd written what it was about, McNamara choose to take the entire later portion of his book and dedicate it to his own personal little "the ins and outs of mediumship" essay. It was boring to me because I don't believe in it the way the author does. Infact, I find quite alot of it to be positively ridiculous dribble. Since McNamara is a medium, it makes sense that he'd work more background info on spiritualism and psychic-mediumship in to his book. I don't think he went about it in the right way however. I think McNamara veered too far off the intended course with this book. Furthermore, I believe that readers who pick up the book thinking all 242 pages are going to be about Doyle will be sadly mistaken and disappointed. If the author wanted to write a book that purely promoted his spiritualist viewpoints he could have easily done so, even using Doyle's tale, as an example and inspiration. As it was though, the author seemed to have more to talk about beyond Doyle's life, and it came to be very excessive and not necessarily relative.

The book would have been far better had the author stuck to the subject at hand, which was Sir Arthur Conan's purported contact and the insight he had to share. It wouldn't have been odd to see the author discuss various aspects of spirituality or his background (mediumship,etc) in more detail since it would all come together with the common theme and storyline. What didn't make sense though was dedicating so much of a book about Conan Doyle to information in which Doyle was no longer even discussed, let alone mentioned. It was as if the author went down a rabbit trail designed with the sole purpose of recruiting and promoting his spiritual, psychic, and medium beliefs. It's entirely plausible that other readers didn't find this so grossly over the top, but for me I didn't see the need to give so much unnecessary information.
Posted by RebekahC at 8:19 PM