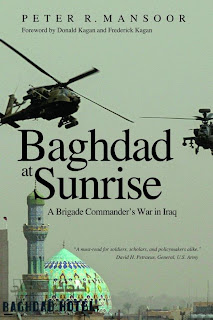 Typically I do not enjoy reading anything fictional or non-fiction that deals with military storylines. I have nothing against the books themselves, they just don't strike a cord of interest within me. I have the utmost respect for our nation's military however, and even the most uninformed of us have in some way been affected by the war our country has been involved in since 9/11. I don't have a background in the military, but I have many family members who have served in various fields over the years. Some who have been deployed during the current war as well. But, I digress... What I was meaning to say, is that under normal circumstances I'd have never picked up a copy of Baghdad at Sunrise to read. I just wouldn't consider it my usual cup of tea. Yet, when given the opportunity to receive a copy for review I decided to accept based solely on the fact that I do enjoy memoirs. I figured this might just be an interesting read that I could keep up with as it would deal with a modern day situation that we've all heard varying reports on over the years.

I won't tell you it was an easy read because that it definitely was not. There were a lot of aspects that I'm sure simply superceeded my comprehension due to the information load. On the whole though I found this to be a really interesting inside look at the war in Iraq. Spanning a tour of duty in several cities, we got to see how Mansoor came to lead his unit and what life was/is really like in the raw and brutal battle zone. Not unlike wars that have come before and are likely to come again in the future, this is a war where good goes against evil. As a nation I think many have come to look upon Iraq as a breeding ground for evil. True to an extent, yet evil is everywhere- here, there, worldwide. I knew this from the beginning and still found it very refreshing to see through Mansoor's eyes that not everyone there is against us. There certainly are plenty that would like to see the US fail, but as Mansoor recounts in this book there are so many more who are looking for the freedom we offer. I had no idea that US military used locals to assist in the war. Maybe I live under a rock. Maybe the media just doesn't present us with this look at the "enemy". Either way, this is only one of many things I learned from reading Baghdad at Sunrise.

Like I said, there's so much information that I'm sure I didn't get it all, undoubtedly I'm not doing the book justice here. I will say though that whether or not you enjoy military reads, this is a book you should consider. I think you'll likely gain a lot of insight, like I did, about how things really are for our soldiers and for the people of the nation we've signed on to protect and assist.