The Bird Room by Chris Killen 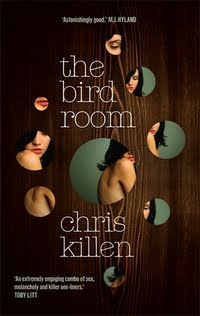 First time novelist Chris Killen shows the world he's not an amateur with his debut release, The Bird Room. Set in modern day UK, this is a book that delves deeply into the struggle and chaos of emotional and sexual dysfunction. Told through two separate stories that eventually conjoin via their social awkwardness, it's a book ripe with dark, filthy angst. The main characters constantly struggle with a lack of self esteem and confidence in themselves on a personal level. The intensity of it all quickly causes it to ebb over into these character's entire beings making their jobs, family, friends, and romantic and sexual relationships all swiftly begin to suffer.

Will isn't anything special, but his girl April is. He's one hundred percent sold on her, yet because he lacks the self respect and confidence necessary to maintain it, his relationship is on the chopping block. Resolution is merely a conversation away; however, Will doesn't seem to be able to give himself or the relationship the benefit of the doubt. A darkness grows within him, and as the self loathing continues to overcome him so does the inevitable truth about his relationship with Alice.

Clair used to be a good girl. She used to live a normal life and do normally mundane things. Now though she's anything but normal. Hoping against all hope to one day make something wonderful of herself, Clair- who now calls herself Helen, is living out her life through the mostly vile fantasies of others. It's not the life she's always envisioned for herself. She's become an actress alright, but not the kind living the glamourous life of fame and fortune. Just making it through the day is a struggle, and without some kind of intervention Clair, or Helen, won't be winding up on the cover of any magazines- not the good ones anyways.

The Bird Room is a story of love, hate, self loathing, and self discovery. It's raw, gritty, vulgar, and disturbing. Not a feel good love story, and still one that draws the reader in with it's wildly wicked storyline. Everybody has bad days; though for most of us the days come to and end and when the next one starts everything is just peachy keen once again. Will and Helen aren't as lucky, and their stories tend to weigh on the darker side of things. And that right there is what makes their troubled tales so intriguing.

Thank you to Harper Perennial Books for my opportunity to review this title.

~Bookish Mom, aka Rebekah C
Posted by RebekahC at 1:16 PM