The Perfect Couple by Brenda Novak 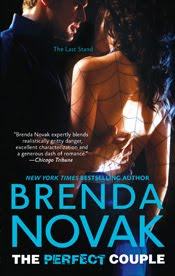 Have you ever found yourself secretly spying on your neighbor, wondering who they really are and what they really do? Have you ever imagined, if only for a second, that there was more than meets the eye and that your quiet little neighborhood wasn't really as quiet and quaint as it seemed to the naked eye?

Brenda Novak's The Perfect Couple does just that. With never a dull moment, this book takes the reader right behind the front lines and shows just how deceptive the human nature can be. One who at first appears to be the world's best neighbor can infact be a blood thirsty, psychopath. Meanwhile, one who appears to be looney off his rocker can indeed be as sane and harmless as a mouse.

Zoe Duncan is a lot of things but a bad mother is not one of them. Therefore, when her thirteen year old daughter, Sam, suddenly goes missing from her own backyard in the family's upper class neighborhood Zoe has no idea what to think. Struggling upwards from a life already ripe with trials and pain, Zoe is no stranger to living in fear of the unknown. Her own daughter's very existance in and of itself is born from grief, but even then she'd never in a million years wish her away. So where on earth could she have gone?

It's a mother's worst nightmare, and no one seems to have a clue as to what could have happened. Sam wasn't always one hundred percent thrilled to bits with the current social situation she and her mother were in. Now engaged to the older, rich, and oh so uptight, Anton, Zoe got used to telling herself this was the life she wanted. It was the security and well being she craved. Sam, on the otherhand, saw through the facade and wanted nothing to do with Anton. She knew the feeling was mutual because her existance only put an undue strain on the relationship. Zoe knows her daughter was unhappy, but she also knows that no matter how much Sam disliked Anton she would never just up and run off without a word. No, Zoe knows that for her daughter to have vanished without a trace it means that there is something far more terrible going on than she ever thought possible.

In a race against time, where uncertainly and blindness are her biggest enemies, Zoe must battle everything she thinks she knows in order to unbury the unfathomable truth and save her daughter before the clock runs out. With Jonathan Stivers, the P.I. assigned to her case by The Last Stand, a victim's charity & action group, Zoe must work to uncover the secrets behind Samantha's disappearance. It's not enough that she's completely stressed out with everything else she has going on, but when Stivers enters the scene so do some unfamiliar feelings that Zoe's not quite sure she's ready to add to the mix.

He's young, attractive, and dedicated to helping her get her daughter back- alive. Jonathan is everything she could hope for and then some, yet Zoe has every reason in the book not to allow her feelings to get muddled up in the drama of the day. No amount of sexual chemistry can bring Sam back, but perhaps if Zoe plays her cards right she can end up with an Ace in both hands. Sam is out there, and she has every reason to believe she's alive. However, only time will tell how involved Zoe can get without going over the falls of no return. Mr Stivers is here in a professional level to help her find Zoe and bring her home safely, but something about him allows him to calm her like a strong balm to a fresh wound. He knows how to say just the right things, do just the right things, and he seems to have a good theory on what could have become of Sam.

In a rushing game of cat and mouse, The Perfect Couple is a non-stop action thriller filled to the brim with exciting twists and turns. Who knew that delight and disgust could so easily go hand in hand?! Not just one but two major antagonists warp your mind and leave you re-evaluting everything you already thought you knew about those around you. Double check your locks, say that extra prayer over your child, and then settle in with a good drink and your very own copy of The Perfect Couple. Bound to scare and entertain you, this book offers an incredibly realistic picture of just how far a mother will go to save her child from an uncertain fate.

NOTE: This is a book that deals with the very strong and disturbing topic of sexual abuse among other things. As book #4 in Novak's THE LAST STAND series, it works to tie in past characters but does so in such a way that makes new readers to the series very comfortable in picking up here with this new release and not clear back at the start of book #1.

Anyone who would like to preview THE PERFECT COUPLE please feel free to check out an excerpt from the first chapter as generously posted by Ms Novak on her website here.