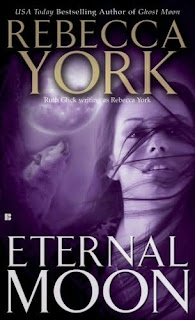 Last year I had the pleasure of inviting Rebecca York to guest blog with me, at another site I reviewed for, about her then current release Ghost Moon. The book sounded really interesting, and I was certain it would be one I'd quite enjoy. Over a year later, I still have not read Ghost Moon. Shame on me; I know. (LOL) I have, however, had the recent privilege to read and review York's April 2009 MOON series release, Eternal Moon. The eighth book (tenth Marshall clan story) in an already stunning line up, I was very eager and excited to finally have an opportunity and reason to see what this series was all about.

Renata Cordona, a reincarnated goddess from another time and place, has seen more than her fair share of loss and devestation. Jacob Marshall, now a werewolf from the Marshall clan, also has suffered more than his due of grief and heartbreak. What neither realizes about themself or the other is that their roots go back in time and intertwine in a way far greater than either could possibly imagine.

An undercover PI posing as a real estate agent, Renata hopes to discover and stop the merciless killer who has already preyed on three innocent women. Jacob, who feels drawn to Renata's essance, doesn't like the danger she is putting herself in. He can't be certain without getting closer, but Jacob is quite convinced that Renata might just be the life mate he's been searching for. Finding her savagely brutalized and murdered, before he can make sense of his feelings for her would be disastrous. So, Jacob takes it upon himself to be Renata's secret guardian angel. Trailing her in his wolf form, Jacob is able to observe Renata without putting himself in the mix until he is ready. And then Renata is nearly attacked by a pack of wild dogs...

Completely unaware of what doors his intervention will open, Jacob puts himself between Renata and the wild dogs. What's done is done, and now Jacob must decide whether to follow his heart on the complicated and crazy adventure he's about to embark on. It won't be easy and it won't always make sense; but if the fates will allow, Jacob and Renata both might come out alive, well, and happily together on the other side.

I have to say, it wasn't quite what I was expecting. I enjoyed the storyline and characters, and as a whole I thought they played out well together. I think I was expecting more on the werewolf front though, and instead got a story that dealt a lot with an alternate universe and strange mythological Greek inspired goddesses and demons. It was weird. Weird in a good way; again, I don't want anyone to think the book or story was poorly written because truly it wasn't. It just wasn't really my cup of tea when all was said and done. It seemed to me that there was more of a fantasy feel instead of the paranormal edge I was looking for. So, while bumping the rest of this series up my queue probably isn't going to happen anytime soon it's not going to be because of the content but more so for the personal lack of interest in this particular story's style.

Having said that, I suppose I should mention that I did have a couple of issues with the quality of the writing within the story. First and foremost, I was totally put off by that fact that the sex scenes, in general, seemed rather repetative, as if they were all slightly tweaked versions of a cookie cutter style 'copy and paste' version. Then again, maybe the fault was all my own as the reader.

My biggest issue of complaint, I'd have to say, was that I found the author's use of the word "cock" to be redundant and lacking imagination. I can enjoy a good descriptive sex scene, just as much as the next girl, but I want it to be believable. To me, when an author uses this word to refer to the male genitalia, it comes across as brash, vulgar, and completely unsexy. I do realize and acknowledge, however that there are plenty of women who probably do not have a problem with the word "cock" and do use it when talking and writing. So be it. Perhaps if it had been used itermitantly with another word or two, the author could have brought the necessary emphasis to the hard and frenzied sex scenes where the language was intended to imply the intense emotions and raw, basic need expressed between the partners. For me personally though, I just don't see how its constant overuse brought anything to this particular story. Infact, I'd go as far as to say that, if anything, I believe it became more of a cliche by the end.

Overall, I'd rate this probably at a 3 1/2 on a scale of 1-5. It wasn't my favorite book by any means, but it was a decent read even though the story took a different direction than most paranormal reads I'm used to.


Thanks to Publicist Binnie Syril for the review opportunity.